Boschetto, a quiet village in the countryside, was founded in the second half of the fifteenth century, when in 1454 the local authority asked some farmers to deforest an area northeast of Chivasso where bandits were living. 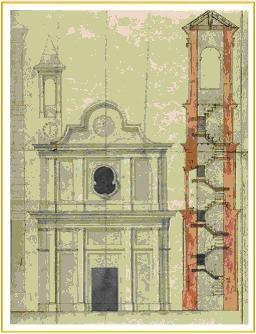 The fine baroque façade is made of bricks and was reconstructed between 1738 and 1742. According to Carlo Caramellino (1998), it is by the architect Costanzo Michela. The interior underwent several modifications. Of note is the marble balustrade that leads to the presbitery. It dates from 1752 and was originally in the convent of Saint Bernard in Chivasso, as were some parts of the central altar dating from 1770.