The building at the opening of the Cavour Canal 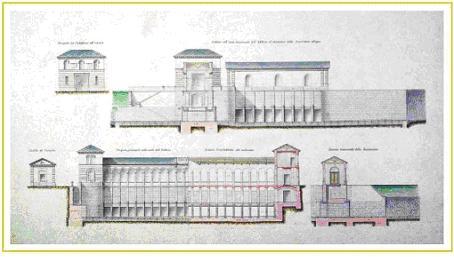 This massive construction is the beginning of the Cavour Canal, one of the major achievements of Italian engineering in the nineteenth century. The canal, which is still working today, required three years of work between 1863 and 1866. It was ordered by Camillo Benso of Cavour in order to bring water to the provinces of Vercelli and Novara, particularly the rice fields. It is 85 km. long and takes its waters from the river Po and the Dora Baltea, bypasseing the Sesia and joining the Ticino at Galliate.

The building at the opening of the Canal dates from the 1870s, and is built with very resistant bricks and stones. Next to this historical landmark stands a bronze statue, by Francesco Porzio (1898), of Carlo Noè, the engineer of the Canal. This artificial waterway, however, owns much to Francesco Rossi, a land surveyor, who between 1842 and 1846 drew up a project which served as the basis for the actual canal.