This stone is believed to be a funeral monument dating from the seventh or the sixth century B.C.

Its shape and dimensions (4 m. high, 1.5 tons) recall two other stones found in Mazzè and Lugnacco bearing similar circular carvings, suggesting a wide diffusion of this kind of monument in the area. This stone has a particular history.
In 1499 a long stone (lapis longus) found around the Church of Saint Michael, between the castle and the Duomo, was used as a pillory to punish insolvent debitors who, besides having all their belongings confiscated?, had to stand in public barely dressed and clap their buttocks against the stone.

In the second half of the seventeenth century, the pillory was moved to the western walls of the central square. When the French arrived in 1798, the stone, considered a symbol of the ancien régime, was removed and placed where it stands today. At the beginning of the twentieth century it was used as a bench. Recently, the local historian Prof. Luciano Dell’Olmo recognized the importance of the piece and drew to it the attention of the Cultural Heritage Authority, which acknowledged its archeological value. The town administration accordingly then decided to restore it. 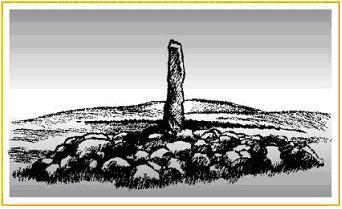