The construction of the church began in 1584 and was commissioned by the confraternity of the “Santissimo Nome di Gesù,” which used it as its headquarters. It was consecrated in 1607. The façade and the interior underwent transformations that began in 1737 under the responsibility of the architects Bernardo Vittone, who designed the cylindrical clocktower (1751-57), and Paolo Lorenzo Garrone from Chivasso. Inside, there are interesting paintings by Giovanni Battista Grassi that date from the mid-1700s, representing scenes from the childhood of Jesus,  as well as two icons of Saint Vincenzo Ferreri and of Blessed Angelo Carletti from Chivasso. Around 1713, a wooden sculpture of the Assumption by Carlo Giuseppe Plura was placed in the choir. Also of note is the medieval polychrome wooden Cross. 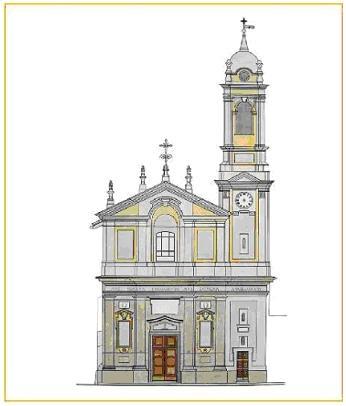