The church, founded by the marquis of Monferrato, was consecrated in 1429, before completion of its construction. The façade is decorated with friezes and figures in terracotta in the late gothic style, probably dating from the end of the fifteenth century. Twelve of these represent prophets, another twelve the apostles, and all are placed on pedestals surrounding the main portal, which is decorated with images of the Virgin with Jesus and other saints. Above the portal stands the Saviour with the Virgin and the Archangel Gabriel. The rosewindow is crowned by an angel with the sun and the monogram of Jesus. On the left of the façade stands the clocktower. Built in the second half of the fifteenth century, it originally was topped by an octagonal spire covered with tin, according to which the people of Chivasso derive their nickname of “facia ëd tòla” (Tinface). 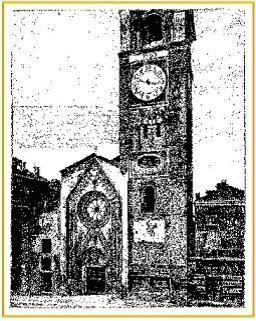 During the siege of 1705, the spire was demolished and substituted a few years later with the present construction.

The interior is eclectic in style. In the twentieth century, some sections of the medieval structure in brick in the right nave were renovated. On this occasion, the neo-classical decoration by architect Andrea Cattaneo (1824-1828) was partially destroyed. At the right of the entrance sits a set of terracotta figures representing the Mourning of Jesus, dating from the second half of the fifteenth century. The second altar of the right nave is decorated with a painting on the same subject by Defendente Ferrari, dating from around 1525. The wooden pulpit (around 1660) is decorated with reliefs representing the Saviour and the Evangelists. The organ on the balcony was built by Felice Bossi in 1843 and contains 3800 pipes.